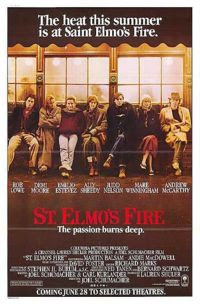 I've seen this movie a million times I'm sure, but hadn't watched it in quite awhile. It was on TV last night.
When I was in love with this movie (along with Judd Nelson, Andrew McCarthy and Rob Lowe) I didn't really analyze it. It was 1985 I was still in high school.
However, I was startled by something last night. Each of the male characters--Billy (Rob Lowe) was the bad boy, not REALLY bad, just sorta bad, Kevin (Andrew McCarthy) was the writer, sensitive one and Alec (Judd) was the political, savvy one. I had crushes on each of these characters and actually ended up marrying someone who is a blend of them all.
Yes, I left out Kirby/Emelio--I've never been a fan of his.
"It's St. Elmo's Fire. Electric flashes of light that appear in dark skies out of nowhere. Sailors would guide entire journeys by it, but the joke was on them... there was no fire. There wasn't even a St. Elmo. They made it up. They made it up because they thought they needed it to keep them going when times got tough, just like you're making up all of this. We're all going through this. It's our time at the edge."
And, coincidentally, I'm a blend of all the female characters to some degree.
The soundtrack to this movie is good too as I remember. It was that whole 80s Rat Pack genre, Class, Breakfast Club, Sixteen Candles, etc. Breakfast Club and St. Elmo's were the best though in my opinion. I loved Say Anything too.
Penned by creative kerfuffle at 8:57 AM

Now I have the theme song stuck in my head...