The Girl (who just turned NINE yesterday) learned a hard life lesson tonight. She's in third grade and since kindergarten she's been waiting until the third grade when she could try out for the school talent show. About two months ago the note came home from school to sign up to be in it--you have to audition and not everyone makes the cut.

The Girl decided she was going to sing in the talent show. My heart sank because, much like me, she can sing the hell out of something in the car along with the radio, but love her heart, she can't really sing. We were supportive though. She wasted about a month or more hem hawing around about which song she was going to sing. After Christmas break (which would have been the perfect time to practice) she decided on a song. Then changed her mind about a week ago. It's a song from the Cheetah Girls on Disney, Cinderella (never mind, you don't know it) but it has a good message about not needing a knight in shining armor to save me I can rescue myself etc.

Last week The Hubby bought the CD. We have not prodded her about practicing, but we've mentioned it a few times. Tomorrow is the talent show. Upon closer inspection of the information she was given last week you can't sing to a CD with lyrics. Great, the CD we have has lyrics. So when I got home tonight I searched for something to download that would let me take the vocals out of the song. Of course I'm technically retarded and couldn't figure this out. Meanwhile I printed out the words for her, for the second time, so she could practice. Note, this is the first night she's offered to practice and I had to get hard nosed with her about it.
I went back the Internet looking for help, looking for the song etc. to download, found it at the Evil Empire's Web site and low and behold for 88 cents I could download the karaoke version of the song. By now it's like 8pm and the kids go to bed at nine. So I'm installing and downloading and trying to figure this shit out and she's practicing in the background with the vocal version.

Sing louder I shout every so often--she's more worried about making up dance moves to go along with the song that she doesn't know the second or third verses to.
Read the words I shout--sing louder.
Finally at 8:20 I get the vocal free version onto a CD, she pops it into the CD player. I'm nearly bursting with relief that I got the damn thing to work and just a little proud at my perserverence with getting it.

The first time she listens to the music without the words she draws a blank. She can't do it. She can't sing without the vocals--and the rule is no backup vocals.
It's hard. She cries, I feel like a horrible mother for not making her buckle down months ago and practice.

I try to point out that 65 kids are trying out for 15 spots and I'm sure at least 15 of those kids have been practicing. I gently tried to explain that waiting until the last minute doesn't always work (yes, I know, me the world's biggest procrastinator giving those words of wisdom is more than ironic, it's hypocritical, but what else was I supposed to tell her?). She has another talent show opportunity in a few weeks with Brownies, I tried to stress to her the importance of practicing for that one and maybe, since she's come to the realization that she can't sing that well, maybe she needs to pick another talent. Like a skit or poetry or a dance or something.
She went to bed sad, which breaks my heart, but I hope not devastated and ready to give up on ever trying something again.
Penned by creative kerfuffle at 10:23 PM 1 comment:

Of all the stuff that fills my email box the two good things I get every day are Quotes of the Day and the Writer’s Almanac. Most of you at one time or another have received some tidbit of information I’ve gleaned from one or the other.

The Writer’s Almanac includes a poem and then 3-4 literary birthdays with a brief bio. This bios interest me, some because I don’t know anything about the person and it’s always fun to learn something new and obscure, others because I either get inspired or am amazed that someone, like me, can achieve such acclaim.

Well today is Carl Sandburg’s birthday. I’m not going to lie and say I know anything about him other than I recognize his name and knew he was a lauded poet. Googling him I found out that though he was a Midwesterner, he ended up living in NC in his later years and he died in 1965.

Here’s the entry on Writer’s Almanac:

It's the birthday of journalist, poet, novelist and biographer Carl Sandburg, born in Galesburg, Illinois (1878). As a hobo he collected and learned a number of folk songs and published them in a collection called The American Songbag (1927). Eventually, he attended college and a professor, Phillip Green Wright, was the first to publish a book of Sandburg's verse, In Reckless Ecstasy, in 1904. He went on publishing poems along with articles about the labor movement but he didn't have any real financial success until a publisher suggested that he write a biography of Abraham Lincoln. His Abraham Lincoln: The Prairie Years, published in 1926, was Sandburg's first bestseller. He moved to a new home and devoted the next several years to completing four additional volumes, Abraham Lincoln: The War Years, for which he won the 1940 Pulitzer Prize.
His Complete Poems won him his second Pulitzer Prize in 1951.

The thing that struck me about this information is he went from being a hobo to eventually attending college--how in the world does one do that?

I love this quote:
Carl Sandburg said, "[Poetry is] the successful synthesis of hyacinths and biscuits."
Penned by creative kerfuffle at 10:18 AM No comments:

Doing what you love

With the new, and better year (I hope) underway, I’ve been having deep thoughts. Three separate conversations in the last week have made me wonder if I’m receiving some sort of sign as to what to do with my life.

The first conversation was with my brother, who also had been doing some soul searching as to his job. He finally made the decision to stay put because he really wants to focus on his friends and family this year and he’s decided the purpose in his life is not really all about what job he does. He wants his happiness to come from his life, not his work, though he’s not really unhappy with his work, just sort of bored, like me.

Another thought that came from conversations with two work-related people is that you should do what you love and the money will follow. That’s a nice idea, but a little harder to accomplish from my perspective. These people of course have already made their money so they have the freedom to say money isn’t important, still I do understand the sentiment.

That got me to thinking about what do I love, what would I love to do for the rest of my life that would be fiscally viable as well as personally fulfilling. You know what? I’m ashamed to say I don’t know what I would do. Sit around writing essays and blogs and commenting on everything that caught my attention, which could be fun. I think it would be fun to be a book editor or to open an art gallery.

Perhaps though, I’m a freak of nature and am the only adult out there who likes to color, but I know I’m not, one of my aunts gets just as excited over a new box of crayons as I do. Maybe we’re the only two adults. Crayola, not those Rose Art or other knockoffs. The Girl got me one of my favorite gifts this year—the mega box of Crayolas, 120 crayons and a giant coloring book (plus the fuzzy pink slippers).
So, despite my age I still don’t know what I want to be when I grow up, but I know it’s not what I’m doing now.
Penned by creative kerfuffle at 4:38 PM No comments: 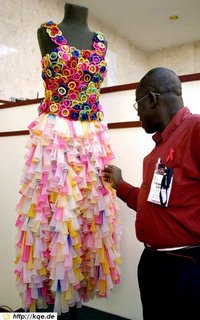 This dress raises so many...uh, questions and offers so many openings for...ribbing.

In this case I guess size really does matter (and I'm sorry if you say it doesn't I'll call you a liar).

If the dress is too small do you get it in a lubed variety?

What about flavors? Yes, there are flavored condoms out there, do not ask me how I know.

Can you wear this dress outside? I only ask because don't most condoms say do not expose to heat and sunlight for long periods of time? If you do will the dress just disintigrate?

If you wear this dress, should men take it as a sign that you are always prepared?

What if Monica Lewinsky would have worn this dress instead of that blue one?

If you wore this dress outside and it rained would you still need an umbrella?