When I take the kids to school in the mornings (because we are not organized enough or get up early enough for them to ride the bus--plus buses don't have seat belts and I've never understood that) there are a lot of parents dropping off their kids. To keep all of the cars off the main road we have a drop off system--four lines of cars that take turns feeding into the main drop off area where teachers open the car doors for the kids and make sure they aren't running around willy nilly and get hit by a car. So you sit in line, wait your turn to go etc. No biggie. What irritates the crap out of me is the people who go out of turn and do it blatantly. I want to jump out of my car and bitch slap those parents.

We went to a Christmas party last weekend. I swear I think it's the first party we've been too in forever. It was kinda nice to be the guest rather than the host. There were a lot of people we didn't know, but some we did and we had a good time. I did not go wild and embarrass myself : ) You'd think I would have realized this by now, but apparently I can hold my beer better than I can hold wine or liquor. Both at my party and the other party I drank beer, got a nice little happy feeling but did not cross over into the stupified realm in which sometimes I get loud, remove articles of clothing (ok, just once) and that filter in my brain disappears and I say things I shouldn't.

I'm getting excited about Christmas : ) I would be MORE excited if we had some of that cold fluffy white stuff, at least for a few days, but I guess I will be ok without it. I can't wait to see the kids and the Hubby open their gifts from me and of course I can't wait to see what I get.

I had big plans this year of being Betty Crocker and baking up tons of fun cookies to give as gifts (because somehow my gift giving list expanded this year). It was the Food Network that planted the seed. Lounging on the couch one evening, under the influence of something or other, I happened upon a cookie show. They were making cookies I'd never heard of--Reindeer Ravioli. The next day I even printed out recipes. Did I make these cookies and give them as glowing gifts marking my accomplishments as a supreme baker? Hell no! But, there's always next year!!!
Penned by creative kerfuffle at 9:29 AM No comments:

Yes, for those of you paying attention it is 5:33 am in the fucking morning. Pardon the harshness but as we all know I am NOT a morning person. What started as sneezing earlier this week turned into a head cold over the last two days and this morning around 3ish turned into a nice cough. Thanks a freakin' lot pharmacy lady who recommended whatever OTC pills I bought last night because not only didn't they clear up my shit they pushed it into a cough. Happy Friday!

So the much anticipated (by me at least) Christmas party went well I thought. It was much more sedate than some of our shindigs have been. Partly because the kids were here (yeah, Mom broke her foot two days before so she couldn't keep the kids but oddly enough my sister and her two kids--who are younger and require more actual babysitting than mine do--spent the night at her house that night and if I'm not mistaken she's babysat at least one of them since then--but hey, I'm not bitter) and partly because our friends Crusty and her hubby were'nt there. When her hubby, I'll call him Bob Villa because he can build the hell out of some stuff, and my hubby get together they instigate a lot of bad behavior.

As the hostess I didn't feel like I really got enough time to spend with each person individually--do you ever at a party? But I do think people had a good time. It still amazes me that despite the fact that we have a big den and a living room most everyone congregates in my kitchen. Is that a Southern thing or a party thing? This brings out my pie in the sky dream of knocking down the wall between the kitchen and the formal dining room (that just holds dining room furniture that we never use and that I now do not really like even though it's only a couple of years old)and making one big kitchen perhaps with an island seating area. The Hubs said he thinks it would decrease the value of the house because you'd lose a room but my thought is if we ever sold it (which I don't forsee) I can't be the only person that would rather have a big useable kitchen instead of a regular size kitchen and a formal, unused dining room. Thoughts?

On the work front I suppose things are ok. Out of nowhere about a week ago my boss had a talk with me because his boss is concerned about my performance. That's always nice. I think I've fixed that though. One thing that's really sticking in my crawl (gross huh?) is having to get input from a committee of sorts that doesn't really know what they want me to do they just want to criticize what I do. One person in particular is driving me nuts. I have to set an agenda for an annual meeting, something I've never done, they knew I'd never done when I took the job. I have to line up speakers and panels, topics, etc. and do it for as little money (like free) as possible. So we've been through several rounds of my showing them the agenda and this last time I really felt good about it. Had incorporated their ideas, followed the previous year's outline, etc. and damned if this one person didn't suggest changes again, changes that were the EXACT opposite of what she said two meetings ago! I'm like WTF! Initially I'd proposed one speaker that this person knocked down. Now that I have another speaker lined up this person is saying why not use X--the same person she originally knocked down! Anyhoo--today is our work Christmas party, which should be fun.

Last thought before I smoke a cigarette and hop in the shower. (Ya know, if I liked mornings it would actually be cool to get up a few hours before everyone else and get some stuff done. Of course the Hubs is already up and out today, but that's not the norm.) I was making small talk with a co-worker the other day about kids and Christmas. His kids are younger than mine but he's got a...strange? interesting? novel? (you decide) idea about Santa. His thought is that he doesn't want to lie to his kids about Santa, build up the myth, have them believe in him, only to find out at 9-10 he's not real because then they'd question if Jesus is real too. I've never ever thought about it that way but the idea seems kind of wacky to me. I've never heard of kids not being able to understand the difference.
Penned by creative kerfuffle at 5:32 AM No comments: 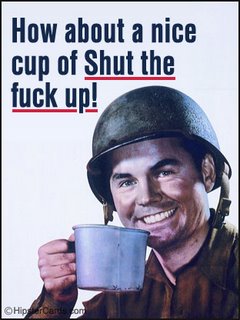 Don't get me wrong, I'm still a shiny, happy person these days but sometimes I really wish I could scream this at people. 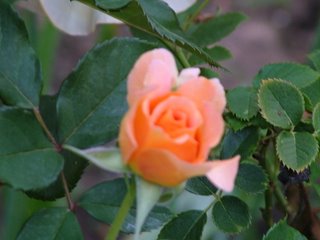 I know it's out of season, but I just found this pic. I grew this : )
Penned by creative kerfuffle at 3:12 PM 2 comments: