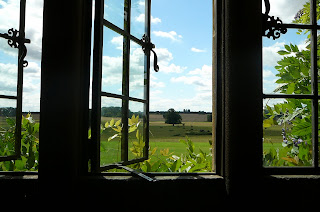 i shut off the air and opened the windows for the first time this FALL. did i tell you i love fall? yes, well, i do.
lots of things have been running through my brain lately...another opening of windows i guess you'd say.


as some of you may know i am not very close to my sister. there are myriad reasons, most of which are because of her life choices in the past and all of the heartache it brought. i love her and i suppose you could say we are on good terms. i am not hateful or mean to her. i just don't call her up and say hey, lets get together. we are not close. a couple of weeks ago when the family was over here for the hubs' bday the siblings sat around talking after my parents left.


i think for the first time in her life my sister is seeing my mom in a light my brother and i have seen her in for a long time. she is manipulative and controlling and selfish. granted, she has more than stepped in a million times to clean up all of my sister's messes. it would be safe to say that w/out my mom, who knows where my sister and her children would be. however, since getting married and increasing her family (my newest nephew was born yesterday! 9/9/09. he's a whopping 10lbs 1oz and loads and loads of black hair) she is trying to put some distance between herself and my mom and my mom is fighting it tooth and nail.


i don't know what this means really. it doesn't change how much i like my sister. but, after our sibling talk i do think that some of these tangled issues i thought were because of her were actually more because of my mom. big surprise there.


another open window--i have a job interview tomorrow. i don't even really know what the job is for, just that this company that i'm familiar with is looking for someone with my skill set. i am not going to get my hopes up. it could be for nothing. maybe the pay is minuscule. maybe the travel is too much. maybe the job is stupid. we'll see tomorrow.


i also have been thinking about my relationship with my parents lately. for several years i have had a cordial relationship w/ them. i wrote a post over the weekend and chickened out and deleted it, though a couple of you saw it, which is totally fine, i guess i just am trying to figure out what it is i really want to say.


the hubs and i have talked recently about our parents and how we deal with them--mostly this involves him keeping his mouth shut about things his dad does and taking ambiguous pop shots at my folks that go right over their heads. i deal with it by not saying much at all and distancing myself as much as possible. however, the hubs talked to his dad a few days ago and mentioned that he should not take his silence as an acceptance of everything that's happened.


i've always told the hubs not to rock the boat w/ his dad because if worse came to worse he'd regret things he said and regret the lack of any relationship if it came to that. (i'm soooo fucking passive aggressive it's not even funny. stick your head in the sand, it's much easier that way--but then, at some point, i think you start choking on the sand and die.) the hub's thoughts are if your relationships aren't great now and keeping silent is eating you up inside, why not let it out, speak your mind and see what happens. it's not like you have a lot to lose right? so, i've been turning that over in my head too. forgiveness, openness, exposure. these are things that have been tumbling around in my head.
Penned by creative kerfuffle at 12:51 PM

I really enjoyed this post. Very insightful and honest. Sometimes it's hard to know how to relate to family, especially if you're passive-aggressive like US. :)

Family can be so incredibly complicated. Best of luck to you in figuring out how to address the things you feel need expression.

Being at odds with your parents is difficult because it's just not normal. You're not supposed to have these feelings about these people that loved and nurtured you when you were growing up. The problem is, it's when you grow up that you realize that there wasn't always love and nurture and you realize just how unfair it is that you are the product of that "nurturing" and it leaves a bad taste in your mouth.
Especially if you are one of those people that have a good relationship with their kids and can't imagine EVER treating them, speaking to them, or thinking of them in the ways you were thought of, spoken to, and treated.
But that's just my take on it, based on my own personal experience.

Good luck on the interview, doll.

All the best for the job interview, keep us posted...

Well, it sounds like your sister may be moving in the right direction, anyway.

I tend to agree with your hubby to an extent. The older I get, the less time I have or want to spend on garbage. But, if I think saying something won't help, or make things worse, I'm not into that, either. Like, I did manage to put my SIL and BIL in their places after that grossly mean email they sent me, but since I know it won't make a difference, I'm not really planning on ever making an effort in their department again, either. I guess it's just realizing when it's time for me to stop investing emotionally in people, which I'm not sure I'll ever be really good at.

I was sure I commented here, maybe I just thought the comment in my head...I do that sometimes.

I really hope your "meeting" went well. You are giving me hope!

I can not wait till we can open the windows, I love a nice breeze in the house!