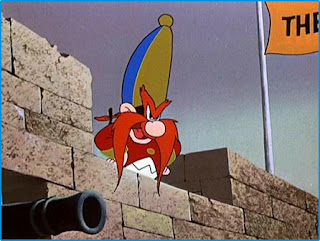 remember yosemite sam? i think he was the only cartoon character that regularly cussed, though the writers disguised it w/ mumbling and growling etc. it always sounded like he was saying racka fracka to me.
anywhoo---i work in fucking podville. and they aren't even tall pods, they are half-wall pods. i am not tall so i can sort of hunker down a bit (yeah, great for my posture) and not actually eye-ball people all day. i've been in this particular heinous environment for about six months now and am slowly resigning myself to the fact that this is just how it is.
most of the time i can tune my co-workers out. lots of times i'm jamming to pandora, softly, and it distracts me from their stupid voices. however, today, their voices are getting on my last fucking nerve.
first, dude that sits kitty corner to me has a loud voice anyway. other co-workers call him slingblade, cos yes, his voice sounds exactly like that. fuck knows i am not one to be opposed to the cursing, but believe it or not as a general rule i don't curse at will at work. well, i don't curse at will much at home either because i like to pretend i'm trying to instill good habits in my kids. i say this only because i do use many "bad" words here, cos that's how my brain works. i'm not a prude obviously. but, in the work place i don't expect to hear shit, god damn nor fuck.
slingblade says these from time to time. sometimes i giggle to myself. today? yeah, i don't know who the fuck he was talking to but dude said his credit score is 820. out loud and shit. really? i might have to check into some identity theft. kidding.
then, across the office i hear another guy. this guy...he's just weird. i don't deal w/ him on any kind of regular basis, but when we have all office mtgs etc. i have seen him scratch. his head. a lot. like dude, do you have fucking lice or what? he messes with his scalp too much for me. anyway, i don't usually HEAR him. but today? he was saying shit this and shit that and goddammit and finally fuck them and the dude in front of me chuckled and i'm just like, really?
this probably sounds so holier than though, because seriously i'm not professional by any means, but when i'm on personal calls i speak soft and low; when i say fuck i make sure it's not like out in the general population etc.
then of course i can always hear this total ass wipe off to the side who should be like captain schmooze of the s.s. fucking schmooze douchecanoe because i really just want to rip out his voicebox. he thinks he is soooo imfuckingportant and spouts off his views on everything and if i have to hear him call someone friend (yes, he says, well my friend) one more time i'm going to bash his beady little head in. fucker.
whew--sorry. i really am in a good mood today it's just all of these voices are driving me batshit.
Penned by creative kerfuffle at 2:23 PM

That would drive me crazy hearing people all day...well, other than when I am trying to eavesdrop in case they are talking about something good.

I especially love listening to students who are moaning and groaning and griping about how fucking impossibly hard their lives are. In college. HA!

Oh, and thank the holy hell that you are in a good mood, or there may have been a story on CNN that I would have had to blog about and say, "OH DUDE, she comments on my blog."

Not that I haven't taken up enough space as it is, but the kiddos put on CartoonNetwork over the holidays, and I had to DIE a little over Bugs Bunny dressing up like a hooker so that Elmer wouldn't shoot him.

shoot, blogger at my comment.
ok, so, yes, i do try to listen for the juicy gossip but of course THEN they whisper. college kids griping should be cunt punched. i'm just saying. and dude--how did i go from bliend to just another commentor? srsly? even if i do end up on cnn. and bugs was totally bi. totally.

I strain my ears to listen to the three gay guys down the hall argue with each other all day. It is the GAYEST arguments and they are often hilarious.

Hotch Potchery said...
This comment has been removed by the author.
6:15 PM

DUDE, you just killed a guy at your work for saying "shit"...I am not claiming you.

I wrote a dorky comment and wanted to do better (I know, right), and then look, it makes me look like a douche.

tracy--one of the guys i work w/ is married (a beard) w/ kids and it cracks me up to listen to him pretend to be straight.

hotch--so far, technically, i haven't killed anyone except in my head. and i saw the other comment and i can read between the lines--you like me, you really like me and you want to be besties and make cookies together etc. yeah, i gotcha ; )

I thought if I deleted my comment you wouldn't be able to read it...

hotch--when someone posts a comment it shows up in my email (thankfully, or else lots of times i wouldn't know i had comments on older posts). i don't know if i set it up to do that or if it's by default.

way to work douche canoe in there...I'm proud of you.

There is a girl at my work who apparently thinks everyone she talks to on the phone has a hearing impairment. I want to go over and shove her head thru her monitor.

tonie--so glad you came over : ) and i have been trying to add douche canoe to my vocab at random : ) i think you are w/in your rights to shove that girls head thru her monitor.