what do these things have in common?

girls' beach trip.
since the girl missed her class trip thanks to mono, she and i went to the beach for a couple of days instead. we have never been on a mother/daughter excursion like that and i loved it! omg. even though at the time i had a allergy/cold/sinus thing and a shoulder thing (more on that later) and i felt a little guilty because we got to do so many fun things, we really had a great time. she blasted lady ga ga in the car all the way there and back. just one cd. (i turned the radio on when she was asleep cos you can only hear ra ra oh la la ra ra ga ga so many times before you want to poke someone in the face w/ a fork). she laughs at me because i can sing the fast-paced chorus of starstruck. we have taken to punching each other at every vw we see on the road (thank you commercial).

normally when we go to the beach as a family we try to be thrifty. not that we don't have fun and spend money, but it was different when it was just the two of us.

we visited the aquarium and i indulged her shopaholic tendencies by venturing in to almost every waves/eagles/paradise beach souvenir shop down king's hwy. we were hunting bracelets. 99 cent jute/bead bracelets like the ones we hunted for last summer. we found them. and i got the business card so i can avoid visiting each of those stores the next time we're at the beach. we walked on the beach, shell hunted, she waded in the water (though two weeks ago it was still too cold to swim in). we swam (in the hotel's heated pools) and hot tubbed. ate salt water taffy in bed and watched animal planet. it was just such a sweet time for me. this is one of my fave pics of the whole trip: 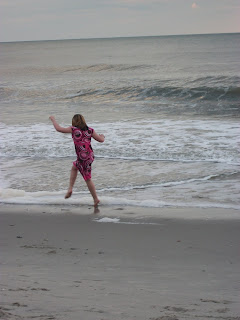 last week the kids had spring break. we went to the zoo w/ my bro/sil (and her parents and niece) and gameboy and puddin (aka bossy butt). it was a blast and the kids had a great time. they all came over (along w/ my sis and her family) and we dyed easter eggs and had a little egg hunt. over the weekend the girl, who was mono free by this point) got a sore throat and fever. yesterday i took her to the doc--strep. thank you germs.

yesterday i also went to the dr because of the above mentioned shoulder issue. for the last three weeks i have felt like someone has been tearing my neck, shoulder, arm apart. heat helps. i've been eating ibuprofen (not helping) and sleeping or sitting have been quite uncomfortable. i got xrays. the dr gave me prednisone for swelling (still nothing for the pain). today the dr left a message that i have a spastic nerve and arthritis. call if it gets worse. really? you tell someone they fucking have arthritis on an answering machine? no doubt i'll be calling them tomorrow.

when the boy got home from school today he went out to ride his bike. helmet? check. cell phone? check. ok, have fun. last summer was the first time we let them ride their bikes around our neighborhood. before they had to stay on our road. i got a phone call. the boy had wrecked his bike into a parked car at the end of a cul-de-sac (i like saying that word, cul-de-sac). a neighbor called. the girl and i hopped in the car and drove around the corner. we got him in the car, she rode the bike home and i called the hubs and he met us at the dr's office. then xrays. then ER for a cast. he had a broken arm. cracked wrist (growth plate) and is a hard splint for a week until the swelling goes down. then to an ortho to see if we're looking at a solid cast or what. the boy's main worry is he's going to get off his track in karate. he's set personal goals for himself and he's worried about falling behind. that kid has the highest pain threshold i've ever seen in a kid. he blows my mind. before he went to bed tonight he said, i feel like life just gave me the finger today. nice. yeah, my 10 year old said that.

the easter break up

after everything i've been through w/ my parents over the last three weeks, my mom finally decided to respond to my email on easter sunday. in a nutshell she said that anything she or my dad had ever done had been unintentional and that everything i had done had been with hate and malice. she said every couple of months i come up w/ something else to be mad about and get pissed at them. she said as much as i've hurt her she still loves me because a parent's love is unconditional. happy fucking easter kid. once again when i expected my parents to be parents, be adults, take responsibility they fell back on, poor us, we never mean to be bad and shame on you for being such a douche kid. needless to say that was the final straw for me. the hubs fired off an email that was honest, not too hateful and basically told her any future/further communication of any kind would come through him. oh, and.....we're DONE.

tonight's post has been brought to you in part by mary jane, as after the shitstorm of stuff we've been going through over the last two months and the fact that the drug test i was thinking i might have to take as part of an employment process does not seem to be coming to fruition, i think i deserve it.

Penned by creative kerfuffle at 11:05 PM

What a week! I posted over on your fb about the boy in the cast. Aidan continued to do karate in a cast when he broke his wrist. He tested for his brown belt in one. It seems like that at that age the cast is a rite of passage... or at least it was for us. The second and third casts for other issues? Notsommuch.

I am so sorry you are having to deal w/ your parents being ridiculous once again. Once again I am awed that your hubby takes it on. What a great partner you have...

I think an herbal remedy just might be the trick. AND I believe it is good for arthritis as well.

And the fun continues. Jeez. Wish there was something I could do other than be sarcastic. (:-D

I'm glad your trip with the girl was a good one. Maybe someday M and I will have that kind of a trip.

Oh casts are fun. Loads of fun (sarcasm). Now granted A wasn't 2 when she had hers, so there is a big different. Make sure he has a ruler or something to help with the itching!

YAY for the beach trip, BOO on everything else! Hope things are better (with the strep throat, boy's broken arm, and your pain). I can't believe what your mom said! Seriously? That just cements that she just doesn't get it. Why is it that the people that cause the most pain are so oblivious to it?

holy frakking moly. you've got a lot going on here.

don't be mad, but I HATE YOUR PARENTS! god! how can parents be so clueless?!?! i guess it happens all the time.

so glad you and your daughter had a blast. and i hope your son's arm heals quickly -- although a karate chop w/a cast might be a helluva advantage in the ring!

That's so cool that you get to watch Mama Robin every day , in her nest. You would have thought that bird might have picked a slightly more inaccessable spot , though, huh?

oops...the previous comment was supposed to go with the blog entry after this one(I have only had two sips of my morning cawfee so far)

That's a wonderful photo of your daughter on the beach!

Do you feel better now that you're done with them, like you'll be better able to let your stress go, or still just as upset and furious as ever? I have often wondered how I would feel if I just told my mother to leave me the hell alone. I am jealous, my friend.