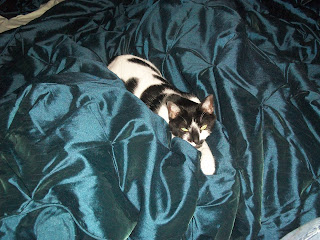 meow, lounging on our bed. yes, it might be true that i don't immediately make the bed if she is napping on it because i don't want to disturb her. i have been known to make the bed around her and then cover her w/ another blanket because she likes being cozy.


what is it that drives us to have pets? since becoming an "adult" i have always had a pet. my pet beagle became our dog when we got married and since then we have always had at least one animal. what is it that drives us to pet these animals? i admit, over the years i have become more of a cat person than a dog person (and i have a theory on that too).
after my cat died last year, the girl's cat started becoming my friend. i think part of it was out of necessity. the girl was giving most of her affections to the then new kitty on the block, jasper, and i was mourning the loss of my cat, and meow and i sort of ended up together. she sits with me every evening. sometimes she sleeps w/ me instead of the girl. 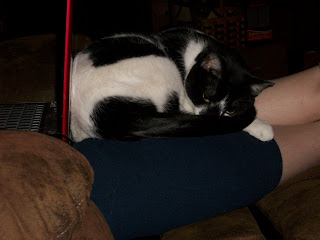 this is where you can find meow most evenings, curled up on my lap, usually w/ a blanket.

but when it comes right down to it, why do we PET them? i pet all the animals. i scratch behind their ears. i pick up the cats and cuddle them and yes, kiss them. i nuzzle them and hug them. is it for them? do i really think the cat is thinking, oh, yes, i needed that hug! do we do it for our own selfish reasons? 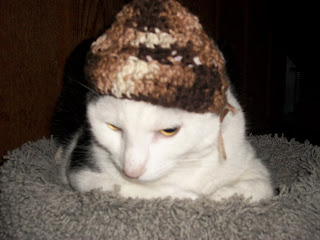 then there's jasper. but seriously, how can you look at this face (underneath the hat the girl crocheted for him. doesn't he look like he's from lapland or something? lol) and not want to smooch it or nuzzle it? 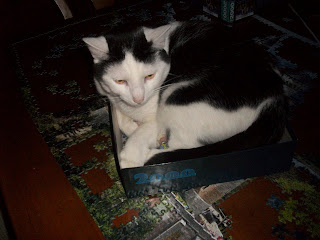 ...even when he is being bad and sitting in the puzzle box.

**********
and here is my cat/dog theory and actually now that i'm writing it i think someone far more wiser has probably already suggested this. isn't this what the movie the truth about cats and dogs suggested? or maybe i'm hallucinating. anyway. i prefer cats to dogs. there i've said it. though at some point in life (years from now) i do want a small little dog, i think for the most part i prefer cats to dogs. cats are independent. they are strong willed. they do not generally pursue you so it's more of an accomplishment when you capture their love and affection. dogs are faithful and act like they're so glad to see you even if you've just been out of the room for five minutes. there is no challenge to winning their affection. the other night jasper came up, of his own free will, and sat on my lap for about 20 minutes. i almost peed my pants in delight because he has NEVER done this before.
Penned by creative kerfuffle at 7:13 AM

I agree with you about having to win a cat's affection - it does feel like an accomplishment!!!! I had never thought that I would be a cat person, because I'm a dog person, but I find that I also love having a cat, and when she actually snuggles up with me and sleeps, it's the most restful thing I have ever felt.

We have always had large dogs, but when I get old I know I will need something smaller, and I think I'm OK with that. The best part about it will be being able to bring them with me everywhere in that little purse thing. Frankly, I like my dogs better than a lot of people, so being able to bring them with me all the time will make it so I have to deal with creatures I don't like less!

I agree that it is harder to win a cats affection - I can't keep a cat because I am deathly (for real) allergic to them. My next door neighbor has a cat who is my buddy. She gives me a kiss every time I see her and she never kisses anyone. I just love her to pieces.

I am going to get a little dog (maybe even this year) sometime soon. A little, non-allergic toy poodle-ish mix. Can't wait.

This was hilariously true.I am exactly like you,I like dogs,but am much more of a cat person.My reasons for liking cats include the following:
1.They can go out and pee/poo by themselves,whereas a dog has to be let out.
2.Cats don't demand your every minute of attention,and then subsequently make you feel guilty if you can't give all that attention.
3.Cats have the weirdest habits sometimes,which makes for some hilarious viewing.
4.Cats always remind me of Brain,from Pinky and the Brain - they always seem to be scheming how they are going to take over the world.

Basically,I love cats,and wouldn't feel a bit of shame if I turned into that crazy cat lady every neighborhood seems to have one of.

I have always been a dog person, but now that I have zero dogs I think I will be a cat person for awhile. I love my two cats but they don't provide the companionship I think a dog does, BUT dogs are way more trouble!

Yeah, cat's make you work harder, and then reward you when it makes no sense. Mine is currently trying to confiscate my laptop by laying across it. Hard to type that way.

Cats, for me, satisfy a need to give affection and feel silky beneath my hands at the same time. They're so cuddly, even the more aloof ones.

I love dogs too, but dogs just don't offer the same type of companionship -- they require too much attention or they get neurotic.

My cats are my babies. I had cats before I had kids.
I want a dog, some day, but it has to be the right dog.

I think I like cats and dogs equally, but never even had a dog as a pet until just six years ago(my Jewel), always having had a cat(or two) since I was a baby. I still dream about MY cat(a calico kitten I got on my 5th birthday) and feel a little sorry for people who don't "get" cats and don't like them.
Cats are loving and hilarious and beautiful and all come in different personalities.
I am like you in that I can't stop petting and hugging and burrowing my face into my pet's fur. It's a tactile, emotional thing.

That pic of Jasper with the hat cracks me up!