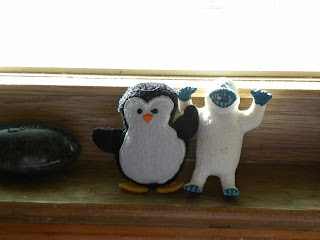 i caught dash hanging out with the abominable snowman the other day. AS has a cool story of his own as it happens. the boy got him in his stocking for christmas. he was much, much smaller. he grows when you put him in water. both dash and AS are living on the edge (or ledge as it were) because they both fit nicely in jasper's mouth and he has been known to carry them around the house.

*************
i am feeling a bit better today. i had a momentary panic attack about the job situation. and, while nothing really has changed, i am still hopeful. and, can i tell you a secret? i have an interview on monday. i AM NOT getting my hopes up at all or putting this info on facebook or anything. i'm going to be low-key about it. an interview doesn't mean i'd get the job. but it's a start.

*************
the kids went to school today (on a two-hour delay) but we are supposed to get ice/glazing stuff starting before dawn tomorrow so my guess is they'll be home again tomorrow.

*************
i called the hubs in the middle of the day, whispered something in his ear and he came home for a quickie before the kids got home. omg. being able to have sex w/out kids in the house is such a wonderful thing. you don't have to worry about what room you're in or how loud you are being or if some one's going to kill the moment by yelling they need something right in the middle of everything. ah....yes i feel better thank you very much.

*************
things that have made me happy (aside from the o's given by the hubs earlier today and the job interview on monday) this week are:

1. we got the lady gaga cd and every one in the house loves it. i think she's the first current singer/artist in awhile that i've really decided i like. i see the 80s madonna in her, but so much more too.

2. the kids and i got our haircuts yesterday. the girl got a real cut (i will post pics on fb). she has long, straight, no-bang hair and has had that style forever. she got it cut once a few years ago, but other than maintenance cuts she's not had a "style." she got a style yesterday, shoulder length, bangs, layers, it is super cute.

3. lost, the final season, finally came back on and i get to oogle my boyfriends sawyer and sayid. yum. however, i was no less confused after tuesday's episode than i have been for the last 5 seasons. wow. i told the hubs, the writers of this show are either geniuses or they are sitting on the biggest stash of the best weed EVER. either way, i bow down to their greatness.

4. the hubs has said he has the perfect business idea for us. he can be the pimp and me and all of my out of work friends can be his hos. yeah, he's so generous like that. ha.

5. the washer started acting funny a couple of days ago. it made a shrieking sound and wasn't spinning right. the repairman came out today. i thought for sure it was a belt. the machine is only about 500 years old. nope. not a belt. the culprit was a damn glove caught between the tub and the outer tub or something. really? he didn't have to do anything, didn't take it apart, nothing, just reached down there and pulled the damn thing out. nice. but, at least i can wash now. yeah me.
Penned by creative kerfuffle at 4:11 PM

I love this random post. You are getting more snow this year than us!! We have only had one snow day!

Yay for midday quickies and haircuts and washers that aren't dead.

And good luck on Monday if I don't speak to you sooner.

Sex without kids around is awesome. I am just thankful we have good, sound sleepers and at early ages too! Yay for that and interviews and haircuts and being able to wash and LOST!

Oh, I love love love my kid but I can't wait for the day he is old enough we can just lock the door and know he is fine! I miss sex.

I'm wishing you the best of luck in your job search!

I haven't been here in awhile, so this post was great for a quick catch up! I hope the interview went really well.

Love the penguins (and dash and AS are pretty cute, too).