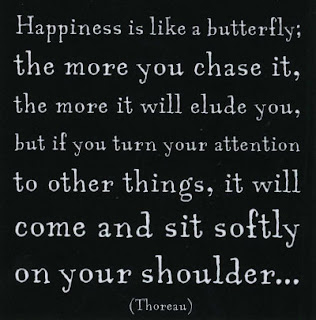 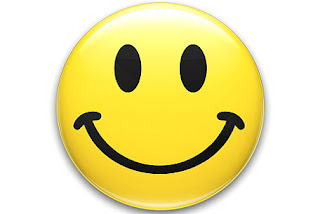 i have decided to be happy. the last couple of work weeks really took their toll on me and something inside me clicked. the hubs has always had this mantra, we work to live we don't live to work. he's always told me i am not defined by my job; that i'm more than what i am when i'm there. i have been worrying about losing my job and w/ that thinking that would be the end of me. what could i possibly do besides what i'm doing now (which is pretty much, in one way or another, the same thing i've been doing since i graduated college). maybe everything he's always told me when i get stressed out at work finally sunk in. maybe it's the fact that we've started going back to church. i am not highly religious. i have faith, but religion or at least organized religion eludes me. anyway, maybe that has something to do with it. or maybe it's because earlier this week i couldn't sleep and formed this game plan for something i could do when my job goes away. or maybe it's a combination of all of those.
i've just decided that i don't want to be like so many of the other people in my office who are walking around like deer caught in the headlights, scrambling to implement these knee-jerk, near sighted changes our new big boss has in mind and losing sight of what we're really supposed to be about. i've decided that even though i know i'll get pissed off and frustrated and have rough days, i can't give the queen of evil power over how i feel and let her wicked, viral negative energy bring me down. because she will get what's coming to her; i'm a firm believer in karma and what goes around comes around and she will get hers.
so, i hope to post more and be more up beat and get back to good.

Penned by creative kerfuffle at 7:43 PM

Good for you! Sounds like your husband has his head screwed on straight. Listen to him. You're going to be just fine.

Fake it 'til you make it, baby!

Seems like you have a plan B, and for me, plan B makes my life so much easier.

You've got an award!Hope this little gesture will bring you some happiness as well.

The thing about layoffs is that there's nothing you can do about it. It's a numbers game and with office politics, the worst people aren't who necessarily are let go. Sometimes it is just plain crappy luck. I feel you on the stress- still living it- but with a plan B, I do feel better. And knowing that it doesn't reflect your performance makes me feel better. And your hubs and kids are wonderful, which is something to put a smile on your face.

Don't worry, be happy! (Though I think he was smoking pot when he wrote the song.)

I'm so glad for you that you're feeling better!!! It's hard to reset your mind, especially at this time of year.

I find that while there's usually a combination of things that helps, typically it's also that I just finish worrying. As in, I worry something like a dog with a toy until I just can't worry anymore, and I move on.

I need to start your new mantra! I'm trying not to be so miserable, really I am! The last couple of weeks have been the worst of my professional life, I need to just let it go!

ib--ah, ninja blogger. yes, the hubs does have his head on straight (most of the time) i mean, after all, he did marry ME : ) he he. but yes, he is often wiser than i am.

hotch--i'm working on plan b, well, in my head right now, but even if that doesn't pan out the way i want at least i got past the point of thinking this is the only job i'll ever be able to do.

penny--thanks for the award : ) i'll come get it this weekend. oh, and when i try to add you to my blogroll it goes to some afterburner page. wtf??

bea--you are so right, it isn't always the worst people who go. and, i have no problem whatsoever w/ don't worry be happy and mary jane : )

astarte--i never thought of it that way, that i was just "done" with it. could very well be.

tracy--it took me a long while to get to that point to be honest. and, you can hear other people say it and really, really want to feel that way, but it just has to be something that clicks for you. i'm keeping my fingers crossed for you!

Oh, karma. I am such a fan of karma.
Unfortunately I don't always have the patience, and wish karma worked faster in some cases, but that sort of defeats it's purpose.
I'm glad your outlook is better. Good for you.