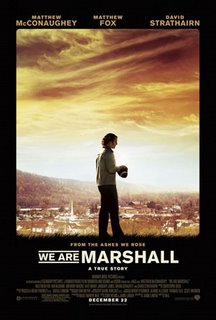 The Hubs and I went to see this movie yesterday (first time in I don't know how long we went to a "grown up" movie). Of course I was pretty much obligated to go--I'm a Marshall graduate afterall.

If you haven't seen the trailers or the movie it is the true story of Marshall University football team, the 1970 crash that killed all but a couple of players, some fans, boosters, city big wigs, and how the team was rebuilt.

I graduated Marshall in 1990, 20 years after the crash. I'm ashamed to say during my four years there I knew little about the crash and in fact what I did know was based on the memorial fountain (yes, the very one I fell in one drunk night) in the quad.

The movie itself was incredible, despite some bad reviews. From those that were there or lived in Huntington, the movie remained true to the reality.

It was sad to watch the movie but also interesting because a lot of it was actually filmed in Huntington on campus--I could see my dorm in some of the shots, the quad, Old Main, the campus and of course the football stadium.

I've since learned that my great aunt and uncle (he was one of the architects for the football stadium) were HUGE MU fans and traveled to most of the games. They flew on the plane with the team to NC for the game and then, because my great aunt "just didn't feel quite right" they decided to rent a car and drive home rather than fly back with the team. My grandmother refuses to watch the movie because when the plane crashed they didn't know my aunt/uncle weren't on the plane until hours later.

One of my aunts was dropping her friend off at work at a Huntington hospital when they saw all the ambulances rushing out to the crash site.

It was a devastating thing for the town of Huntington. I'm not a big sports fan and in fact didn't attend many games while I was in college, but the movie was good and you should go see it. Plus, Matthew hotty is in it and even in his 70s wardrobe he still looks good.
Penned by creative kerfuffle at 3:36 PM