the highs and lows of nature

hey there! i have so many things to tell you but i'll start with the tree.

last thursday night we had a storm. nothing really out of the ordinary or remarkable, just a storm. friday the hubs went to work. i did some freelance work and then took the kids bowling. when we came home the huge bradford pear in our front yard was split in two and part of it was on the house. the tips of it were on the house. it covered bushes and part of the front porch and the tree tops were on the house.
the hubs came home, i called our homeowners insurance, etc. they told me to take pictures, have the tree removed and an adjuster would follow up (he'll be here this afternoon). yesterday the tree guy i had called a few months ago to give us an estimate on the tree out back that is covering the septic tank came out and gave us an estimate on the fallen tree. we decided to do both trees (he gave us a discount) and be done w/ it.
he and his crew showed up at 7am yesterday. yes, it is an ungodly hour to start a woodchipper and chainsaws, but it's about the only way to avoid the heat of the day and get any work done. they took the fallen tree down, chipped it up, etc. and moved on to the back tree.
there is a squirrel's nest in the back tree. we'd seen it. been watching the squirrel all year, much like we did w/ the robins in the spring. we had no idea it was the second nesting season for squirrels. it was amazing to watch trees being felled. i've never really watched it close up before. lots of work. lots of knowing just how to cut a limb. when the last limb came down the nest came down and mama squirrel's back was broken. i sobbed. we heard babies squeaking, loudly. omg. poor mama started crawling away, pulling her back legs. it was the most heart wrenching thing i've ever seen. the tree guys moved the nest, still unsure of how many babies there were, into a neighbor's tree so our dogs wouldn't get them. mama crawled into the neighbor's yard and died at the base of the tree by her nest. it was horrible. awful. i started trying to call around to wildlife rescuers.
the girl, whose bedroom window was inches away from the fallen tree in the front yard, slept through almost all of this. the woodchipper was outside her window and she slept through it. when she did get up and discovered the squirrel baby situation she went .....ah...batshit crazy is a good description. by this time i'd reached one rescuer and left a message w/ them. i was waiting for a call back. the girl wanted to do SOMETHING. help the babies. do SOMETHING. i had no idea what to do. the hubs had been here most of the time, watching the felling, and the squirrel situation. he eventually had to go to work. the girl fumed and glared. i was sick. really just wanted to curl into a bawl and sleep. the girl was persistant. she googled how to care for orphaned baby squirrels, much like she did with the baby birds this spring.
she got a cardboard box and an old blanket and put the three babies in it to keep warm. even though it felt like elebenty billion degrees outside, they were shivering. no h 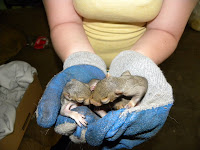 air. their eyes were still closed. she gave them water through a medicine dropper. finally, later in the afternoon a rehabber (that's what they call themselves) called me back and said she'd be happy to rescue the squirrels. she's been doing it for 14 years. she has an outdoor enclosure and already has three other babies she's caring for. she explained that this summer batch of babies usually stays in the nest w/ the mom until spring so she would winter over the babies and release them back into the wild come spring. whew.
two boys, one girl, they're about 3 weeks old

we met her w/ the box of squirrels and turned them over to her. the girl was beaming. she was so proud, as she should be. it is not that the hubs and i didn't want to help, but honestly i had no idea what to do other than make phone calls. the girl is a doer. she is persistant. she apologized for being so hateful and ugly earlier, before we put the squirrels in the box.
it still breaks my heart to think of the mama squirrel. the hubs got her out of the neighbor's yard and buried her.
i miss our backyard tree. we still have tons of trees out there, but.....the yard has a different feel to it now. i miss our tree.
we will have to do some reworking of the yard. the dog kennel was under that tree. i didn't realize just how much shade it provided. the tree guy said it was probably 30+yrs old, older than the house. seems shortsited for a builder to put a septic tank so close to such a tree. 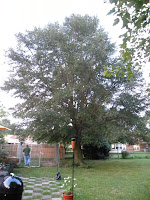 we'll miss this tree. that's the dog kennel under the tree, our house is out of the shot to the left, the checkerboard pavers are at the edge of our patio.

Penned by creative kerfuffle at 9:48 AM

Wow. That is a lot of stuff.
The girl would go batshit crazy here at my house where the woodland creatures are making themselves at home. Seriously, we have a not so fun squirrel situation. They are being relocated. Also the groundhogs.

Aww! Poor Mama squirrel, but I am glad the babies will be taken care of. Too bad they couldn't have moved the nest first, but she would've gone nuts if they messed with her babies.

I ran over a squirrel one time, and watched it pull itself across the road on front legs. I cried all the way to work and prayed it died quickly. Hate that!

Yikes!! I guess it's a happy ending, sorta. Way to go finding a home for the babies though!

Oh my God, you have to put a WARNING when you're going to write about something like that!!!! I think I'm scarred for life with the image of that mama squirrel. I actually shrieked out loud when I read it! I wish you hadn't seen that. I'm so sorry, I'm sure you're scarred for life too after witnessing that. You poor thing. I'm glad the babies are OK, that's a miracle, and that your house is going to be OK.